In the early summer of 1958 a small group of local sailing enthusiasts met to discuss the possibility of a sailing club being formed in Newburgh.' The following office bearers were chosen to get things moving.

A Regatta was organised for 11/12 October 1958 with Perth SC and the Army Association Club invited. 5 boats sailed on the Saturday(stormy), 13 on Sunday. It was regarded as a success.

An open meeting was called on 17th Oct 1958 in the Canteen ,Cornhill Place where all interested were invited to attend.

Not having any premises the canteen (of the linoleum factory -Watson & Co's ) in Cornhill Street was frequently used for meetings. That first winter negotiations got underway to put a slip east of Camerons Pier . At this point it should be made clear that Willie Farquharson ran a joinery and undertaking business (Farquharson & McNaughton's workshop, East Shore) and he also built boats. His premises were south of the current dinghy park where there are now houses. His land included all the land now under the guardianship of the club.

In early 1959 WF confirmed a slipway would be built at East Shore below his yard and a working party was arranged to clear the beach. NSC became members of the RYA and a constitution was drawn up. (March 59 minutes).

Road blocks removed by blasting / Perth SC invited members to their winter talks / turnover £59/3/- with a balance of £26/16/4 / Office bearers elected WF still Commodore / Ladies Committee elected - to be responsible for teas! / Power Craft section approved / Fixture list to include Pennant racing fpr RNLI and King George V Fund for sailors / WF presented the Farquharson Trophy to the club with his Enterprise 1663's picture engraved on it. The boat was helmed by Ian Morrison for the points series (I think WF was crewing).

Open Mugdrum Island Race to be 2 laps. Nowadays we only sail round once. They must have had good winds to do this. 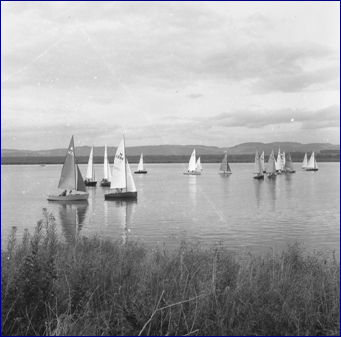 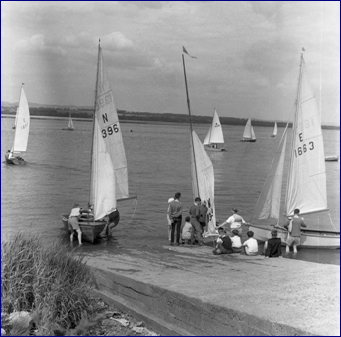 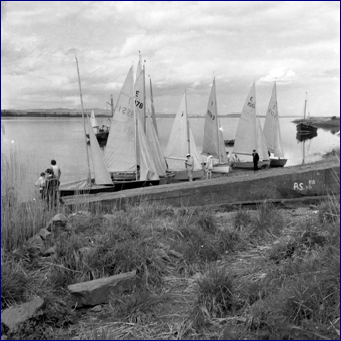 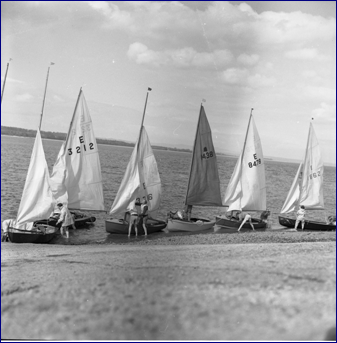