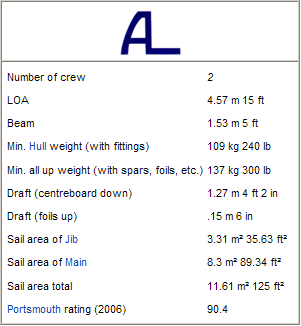 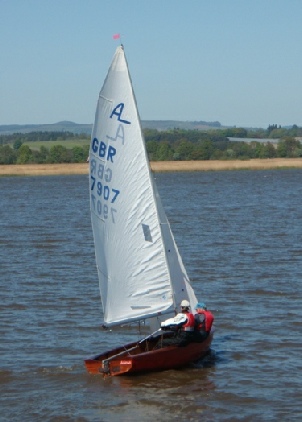 “The only successful boat ever designed by a committee,” is how former Olympic sailor and chief salesman at Fairey Marine Charles Curry once described the National Albacore.

Unlike its predecessors, the Firefly and the Swordfish, this 15-footer, launched in 1954, was not designed by Uffa Fox per se, but was in fact an amalgam of ideas from other boats built at the time by Fairey Marine, brought together by the company as a replacement for an unpopular design.

Birth of the Alabacore
The unpopular boat in question was the 15ft (4.6m) Swordfish which had been designed in 1946 by Uffa Fox as a larger version of the Firefly. Despite an obvious demand for such a design, it had proved unsuccessful due to its heaviness, lack of freeboard aft and price, but it was this design that was used as the basis for the Albacore. Length overall, beam and sail area were kept the same, but the hull was tweaked to produce more freeboard and more strength in the aft sections. Hull sections from the Firefly were incorporated, too, as were the mast and mainsail from another Fairey design, the 14ft (4.3m) Gannet.

Within a year, 30 boats had been built on the production line at Fairey Marine.

By 1956 interest had been sparked abroad, too. Hyannis Port YC in Massachusetts was the first overseas club to introduce a fleet when it imported 16 Fairey-built Albacores; it was soon followed by the Royal Canadian YC, which used the class for its junior sail training.

Its popularity quickly spread in Canada, more so than anywhere else in the world – over the past 52 years, 6,200 of the 8,100-plus Albacores built have been based or built there. There are now established fleets in seven countries worldwide, including one in Cyprus.

Hot Stuff
As with all Fairey Marine designs, the early Albacores were constructed from three veneers of hot-moulded agba. The MkI, of which 700 were built, had an aft deck and bench seats with buoyancy bags beneath and was built until 1964.

Following a fire at Fairey Marine, during which the MkI moulds were lost, the MkII was launched. This differed only slightly from its predecessor and around 1,000 were built before production ceased in 1969. Kit versions were also produced at this time, some of which were fitted out by JD Young and others by amateur boatbuilders.

The first GRP Albacore was built by Whitby Boat Works in Ontario, Canada, in 1961 (see sidebar); since then construction has kept pace with modern techniques. Aldridge-based Speed Sails, which took over production from Jack Holt in 1997, is now the sole UK Albacore builder, and uses epoxy foam sandwich construction.

Like the Firefly, the Albacore is a restricted design, which means that although strict rules govern the hull shape and sail plan there is a reasonable amount of flexibility in how the boats are fitted out. The hull shape has evolved over the years, however, with the latest design including built-in side and bow buoyancy tanks and no aft deck. On the water, the Albacore, with its plumb stem, round bilges and flat sections aft, is a lively and capable racer. In 10 knots of breeze, it can easily get up on the plane and provide an exhilarating ride for its two crew.

Compared with the Firefly, it offers a slightly more stable,  predictable performance, but not at the expense of speed. It is still one of the fastest non-spinnaker designs on the market.

The design was named after the Fairey Albacore, a single-engined, torpedo bomber biplane Fairey-built, 1940-1944.

A new Albacore from Speed Sails costs around £8,995. Second-hand Albacores can be picked up for as little as £400, but up to around £7,000 for a high-spec glassfibre boat in good racing condition.

At 15 feet in length and 240 pounds hull weight, the Albacore is a great first boat for those who are just learning to sail and a very competive racer for more advanced sailors. The Albacore is a fast and lively boat while being relatively easy to learn to sail and race. Swept spreaders supporting a tapered mast with a powerful vang and adjustable sail controls allow a crew to depower in high winds - enabling both light and heavy crews to race head to head A very versatile boat, it is often sailed by husband/wife and parent child combinations. Some of the all women teams are the most competitive in the class. Those looking for a simple to learn, yet high performance sailing dinghy can join the ranks of Albacore sailors who come from all walks of life and range in age from teenagers to masters pushing 80 years of experience.

The Albacore is a boat that is both simple to get into at first, and one which will challenge your tuning and tactical skills for the rest of your life. 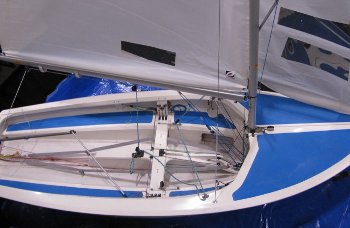