The bear is believed to be a depiction of a stone called the bear stone, from which the Bear Tavern takes its name, was originally set into the abbot’s residence at Lindores Abbey.

The bear and ragged staff is a device of the Earls of Warwick, and as a crozier or pastoral staff is evident above the now obliterated arms of Warwick, it may be he assumed that the stone was caused to be made by Guy, the first Abbot who was a cadet (the brother or son) of that family.

The origin of the legend of the bear goes back to the time of Arthur and the round table. One of his knights was Arthgal whose name in the British language was Arsh meaning bear.

The ragged staff is attributed to Morvidus, an earl of the same family who slew a giant with a young tree which he had pulled up by the roots.

On the 12th June 926, a most terrible single combat took place between the champions of the Kings of England and Denmark, when Guy, Earl of Warwick slew Colebrand, an African giant. In the castle of Warwick can still be seen the helmet and spear of the redoubtable Guy, who is reputed to have been 7 ft. in height and the hero of many legendary stories. 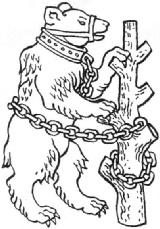 In 1076, the bear and ragged staff became Norman property when Henry de Newburgh was created Earl of Warwick He was the second son of Roger de Bellemonte, a knight of William the Conqueror and a commander in his army during the 1066 invasion. The male line of the Newburgh family ceased in 1242. A female descendant of Henry de Newburgh named Isabel was mated to Simon de Lis, 2nd Earl of Huntingdon. They had no family and on the death of Earl Simon, the King offered the title to William 'The Lion', King of Scotland who gave it to his brother David the founder of Lindores Abbey.

Earl David was succeeded by his son John le Scot on whose death without issue in 1237 the earldom fell into abeyance.

The bear on the hill was cut for a local festival / community project in 1980. The outline was ploughed by a worker from Parkhill Farm, and permission for the outline was given by Mr. Tom Howieson from Parkhill Farm The bear was cut onto Park hill, southeast of Lindores Abbey, not far from Newburgh. The figure was recut at New Year; it is constructed from a shallow trench in which the vegetation is regularly removed mainly by burning. History of the Bear

Newburgh is a royal burgh of Fife, Scotland having a population of 2040 (est 2004). Newburgh has grown little since 1901 when the population was counted at 1904 persons.

It is situated on the Firth of Tay, 7 m. N.W. of Ladybank Junction alongside the Tay Coast Line railway line. Newburgh railway station closed in 1951 (pre-Beeching), and has never reopened in spite of local campaigns for its reinstatement.

For some time, its industries chiefly consisted of the making of linen and floorcloth, malting and quarrying, and there were fisheries, especially of salmon. The harbour was used for the transshipment of the cargoes of Perth-bound vessels of over 200 tons. But most of these industries have now gone. A linoleum factory, owned by Courtaulds, which had been the town's principal employer, closed in May 1980 after a large fire destroyed much of the building. After many years of lying derelict, the factory has since been completely demolished and cleared and its site is now a recreational waterfront. Local services and a few shops provide limited employment, but most residents now commute to larger towns. However, one quarry, for many years owned by Bell Brothers, is still operational, and is now owned by Ennstone Thistle. T Robertson & Sons, of Whinpark Quarry, still run a road contractors' business, although the quarry itself is no longer in operation.

The plain Georgian town house, with central tower and spire, was built on the south side of the High Street in 1808. It forms a continuous block with the other houses. The Laing Museum and Library was added to the north side of the street in 1894-96. Museum open in summer only.

On high ground, about 1 mile S.W., stand the remains (only the pedestal) of Macduff's Cross, which (in legend) marks the spot where the clan Macduff in return for its chief's services against Macbeth was granted rights of sanctuary and composition for murder done in hot blood. Nearby, Lochmill Loch has been dammed to provide the town with a water supply and local fishing.

Denmylne Castle, about 1 mile south-east of Newburgh on the Cupar road, was the home for more than 250 years of the Balfour of Denmylne family, of which the two brothers, James (1600-1657), the annalist and Lyon King, and Andrew (1630-1694), founder of the Botanic Garden in Edinburgh, were the most distinguished members. The Castle, which stands within a 19th century steading whose construction will have necessitated the removal of the Castle's subsidiary buildings, has been unroofed for at least 200 years, and is in an increasingly dangerous state of disrepair. A lintel dated 1620 has been re-used in one of the steading's building.

Lindores Abbey is situated near the Tay, close to Newburgh, and 1 mile N. of the village of Lindores. Of the Tironensian (reformed Benedictine) abbey, founded about 1190 by David, Earl of Huntingdon, brother of William the Lion, there are only fragmentary remain, although the ground plan of the whole structure can still be traced. Best preserved are the south-west gateway through the precinct wall, various discontinuous fragments of the wall itself, and part of the east cloister range, including the still vaulted slype (passage from the cloister to the east end of the church), all built of local red sandstone. The monastic church itself had a single aisle on the north side, with aisled north and south transepts, a central tower (presumably) and a detached western tower or campanile, as at Cambuskenneth Abbey.

The monks were noted agriculturists and their orchards famous. Many of the houses in Newburgh's High Street have orchards with trees descended from the original plantings, although many plots have now been sold and developed for housing. Numerous architectural fragments from the Abbey are built into buildings in the town.

At Blackearnside, a forest of alders, to the east of the village, Wallace defeated Aymer de Valence, 2nd Earl of Pembroke in 1298.

Mugdrum Island, opposite the large Mugdrum estate from which it takes its name, 'ridge of the pig[s]' in Gaelic), is offshore in the Firth dividing it into 'North Deep' and 'South Deep' channels. For many years cattle were ferried over to the island for summer grazing, but this is no longer practised. 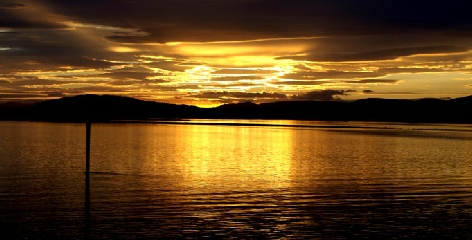 Although a small town there are many local groups engaged in activities to keep the town flourishing.

The Newburgh Regeneration Group has been successful in obtaining substantial financial support to carry out environmental improvements at the River Tay waterfront - previously the site of an old linoleum factory.

A local Management Committee runs the Tayside Institute Community Centre and provides a range of activities for all ages including an after-school club and a computer Learning Centre.

Other facilities found in the town include the Laing library and museum, named after a local historian and benefactor, and an Arts Co-operative is established in the former Town Hall, which incorporates studios for 8-10 artists as well as provide community access for aspiring local residents.

All in all Newburgh is a lively, bustling town with a range of local businesses catering for the needs of local residents and visitors alike.