The International Laser Class sailboat, also called Laser Standard and the Laser One is a popular one-design class of small sailing dinghy. According the Laser Class Rules the boat may be sailed by either one or two people, though it is rarely sailed by two. The design, by Bruce Kirby, emphasizes simplicity and performance. The dinghy is now manufactured by several boat manufacturers worldwide.

The Laser is one of the most popular single-handed dinghies in the world. By 2010, the number of boats produced was approaching 200,000. A commonly cited reason for its popularity is that it is robust, simple to rig and sail. The Laser also provides very competitive racing due to the very tight class association controls which eliminate differences in hull, sails and equipment.

The boat's history began with a phone call between Canadians Bruce Kirby and Ian Bruce. While discussing the possibility of a car-topped dinghy (a boat small enough to be carried on a roof rack of a typical car) for a line of camping equipment, Bruce Kirby sketched what would be known as "the million dollar doodle". The plans stayed with Kirby until 1970 when One Design and Offshore Yachtsman magazine held a regatta for boats under $1000, called "America's Teacup". After a few sail modifications, the Laser easily won its class.

The prototype was originally named the "Weekender"; the sail held the letters TGIF, a common American abbreviation for "Thank God It's Friday". It was renamed Laser (after the scientific mechanism) and officially unveiled at the New York Boat Show in 1971. The Laser became a men's Olympic-class boat at the 1996 Summer Olympics in Atlanta, and a special Olympic edition of the boat was released that year in commemoration. A version with a smaller sail, the Laser Radial, was first sailed as a women's Olympic-class boat at the 2008 Summer Olympics.

The various sizes of Laser are all uni-rigged; they have only a main sail. The Laser Standard sail has sail area of 7.06 m² (76 ft²) and, especially in higher winds (15 knots and over), is most competitive when sailed by a very fit, agile and muscular person weighing no less than 80 kg (175 lb).

Newburgh Sailing Club and the Laser

Newburgh Sailing Club has for some time employed Laser Pico’s in a training role for RYA level 1 & 2 courses, However no one would have suspected for one moment that following the donation of a fine sculpted trophy by George Cameron specifically for the Laser class that the boat would suddenly enjoy an upsurge of popularity within the club. 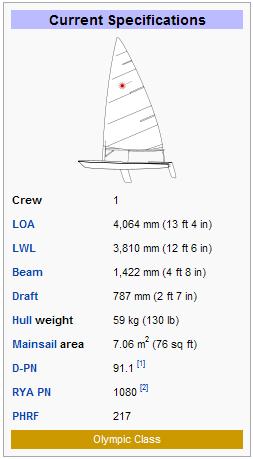 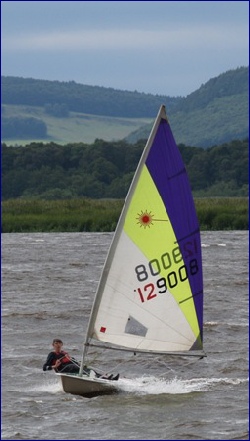 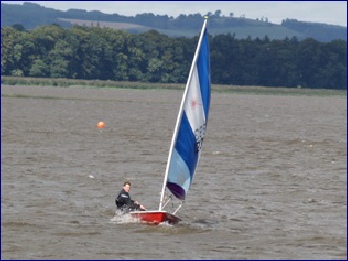 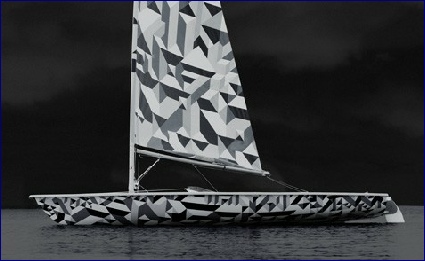 In Europe the smaller Radial sail has surpassed the original Laser Standard sail in popularity, and replaced the Europe Dinghy as the Women's Singlehanded Dinghy for the 2008 Olympics. The Radial uses the same hull and fittings as the Laser Standard, but has a smaller sail, shorter lower mast section and has a different cut of sail to that of the standard or 4.7. Optimal weight for this rig is 121 to 159 lb (55 to 72 kg).

A smaller sail plan for the Laser was developed about a decade later. The sail area was reduced by 35% from the Standard with a shorter pre-bent bottom mast section, allowing even lighter sailors to sail. The same formula as the Radial is kept. The hull is the same as the Standard and Radial. Optimal weight for this rig is 110–120 lb (50–55 kg), thus becoming an ideal boat for young sailors moving from the Optimist.

A fourth and lesser-known variant is the Laser M Rig. This sail was the first attempt at making a smaller rig for smaller sailors. It employed the same lower mast section, but a shorter top section. This variant flopped when compared to the other rigs. This is primarily because the shorter top section didn't allow enough bend to be induced in the mast (as the bottom section is very stiff), this made the boat difficult to sail and de-power especially in heavier winds. This is not a rig recognized by the Laser Class

In recent years and to move the boat with the changing times, the basic sail controls have been upgraded by means of the XD performance kit, with parts made by Holt. As well as this, a second rigging kit has been released, utilizing Harken products. Fitting these kits allows the outhaul and cunningham to be adjusted more easily when under sail via cleats fitted to the deck so that the lines are always available to the sailor. These are complemented by extra blocks and a rule-change allowing up to 9:1 outhaul purchase and 6:1 cunningham purchase. The kicker positioning is largely unchanged, but features a swiveling cleat and now affords a purchase of up to 16:1 for super vanging in heavy air.

A vendor supplied clew-cuff, an upgraded traveler and mainsheet boom-blocks with bearings and a new brake design have been approved by class-rules and are available for sale.

Rooster Sailing, a company based in the UK, designed and created a larger rig for the Laser hull called the Rooster 8.1, specifically designed for heavier sailors. There are two optional mast configurations. Either a 3.6 metre one piece aluminium lower mast section or an fibreglass extender to fit the Laser Standard aluminium lower mast section. The Rooster 8.1 rig is not recognized for racing in events run under the rules of the official International Laser Class Association.