About the Tay River

The River Tay is the largest volume river in Great Britain. With a catchment of nearly 5,000 square kilometres the average daily flow at Perth is approximately 175 cubic metres per second (cumecs). By comparison the Tweed's average daily flow is only 79 cumecs, the Spey 65 cumecs and the Dee 47 cumecs. In addition, the River Earn adds another 30 cumecs into the Firth of Tay and the River Eden discharges 4 cumecs into the North Sea near St Andrews.

The Tay differs from most of the other big Scottish salmon rivers as there are large lochs in the catchment, the largest of which, Loch Tay, is some 23 km long by 1.25 km wide. The large lochs have a moderating effect on river flows, dampening down spates but keeping levels up long after rain has passed. As some of the lochs have been harnessed for hydro electricity generation, this moderating effect has been exacerbated. With hydro, minimum flows on the Tay are now much higher than they would naturally be during a drought but spates are smaller.

The Tay also differs in shape from many other rivers. The Tay can be likened to a large hand placed over the middle of Scotland, whereby long tributaries, like splayed out fingers, come together a relatively short way up from the estuary. In contrast, the Spey and Dee are single rivers, following a main long narrow valley which only gathers water from small tributaries which enter at intervals. These physical differences mean that the salmon fishing on each river has its own individual characteristics.

Nearly all of the major tributaries which form the Tay system commence in the southern part of the Scottish Highlands. The rocks are largely metamorphic with a little granite in the north west. These are ancient hard crystalline rocks, but there are local differences in their mineralogy which in turn creates local differences in the form of rivers and water chemistry. Near Dunkeld, the Tay crosses the Highland Boundary Fault and flows over the lower lying plain of Strathmore which is underlain by the softer Old Red Sandstone.

The highland part of the catchment tends to be characterised by narrow steep sided glens (valleys) gouged out by glaciers during the ice-age and these tend to be fed by smaller streams which cascade down the mountain sides from the higher summits. This topography means that many of the smaller side tributaries of the Tay are inaccessible to salmon and it is the narrow steep sided glens which made it an attractive area for hydro-electric dam building. The predominant land uses in the upper catchment tend to be sheep grazing, grouse moors, red deer and to a lesser extent forestry plantations.

The lower catchment of the Tay, the Isla, the lower Earn and the Eden are very different. The land is lower and much more fertile. Arable farming predominates and some of these areas are among the richest farmland in Scotland.

At Perth the Tay becomes tidal, but it is still 20 miles before the river finally reaches the sea after Dundee. For several miles down to the confluence of the Earn the Tay is essentially fresh, but thereafter the long estuary, known as the Firth of Tay, becomes increasingly salty. 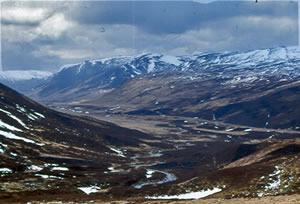 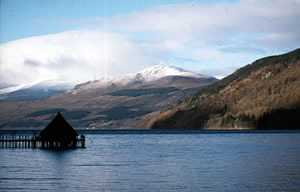 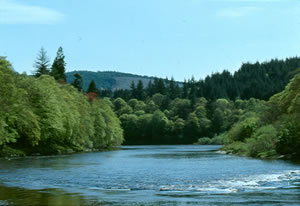 The Tay District Salmon Fisheries Board is the statutory organisation for the Tay Catchment responsible for the management of Atlantic salmon (salmo salar) and sea trout (salmo trutta).

The Board is made up of riparian owners elected to represent the Upper and Lower parts of the catchment and co-opted members who represent the interests of anglers, the Ghillies Association and the Tay Foundation. The Board holds regular meetings.

The Board has offices and a hatchery close to the city of Perth and employs water bailiffs and biologists. Together they look after over 5,000 miles of rivers, burns and lochs.